Bred by E. Paul Waggoner’s Three D Stock Farm, Poco Tivio was foaled in 1947, and was the first foal out of a then 4-year-old mare named Sheilwin. His sire, Poco Bueno, was also owned by Three D.

When 'Tivio' was 3 and already started in cutting training under Pine Johnson, he sold to Fort Worth car dealer Cliff Magers for $5,000. Milt Bennett took over the horse’s training for a year until Don Dodge bought the stallion for $15,000, reportedly the highest price ever paid for a cutting horse at the time.

Immediately, the pair started winning. In 1951 and 1952, they placed fifth in the National Cutting Horse Association year-end top 10. In 1952, Dodge showed Tivio to his AQHA Champion title, consistently winning in both cutting and halter.

Soon Dodge retired Tivio and stood him to outside mares for $300. But it wasn't long before the trainer had Poco Lena, Tivio’s full sister, in his barn. So, Dodge sold Tivio to California horseman Charley Araujo.

As a stallion, Poco Tivio was known for passing on his low-key temperament and flashy working style. His offspring showed as well in halter as in cutting.

Tivio received the NCHA Certificate of Ability Bronze Award, had $11,000 in NCHA earnings and is a member of the Working Cow Horse Hall of Fame. He sired 308 registered foals in 25 crops. Of those, 81 were AQHA point earners, 10 AQHA Champions, 26 ROM earners, and six Superior award winners that won 10 Superior performance awards in five events.

Araujo stood Poco Tivio for several years and then just before his death gave the stallion to his farrier, Floyd Boss, in 1971.

Poco Tivio died in 1976. He was inducted into the American Quarter Horse Hall of Fame in 2013. 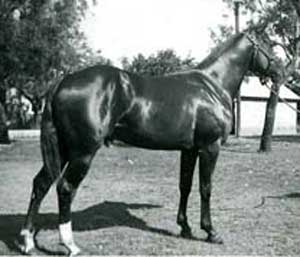 Royal King was 17 months old when Earl Albin and Jack Whiteside of Comanche, Texas, bought the colt for $250 from breeder Felton Smathers of Llano, Texas, in September 1944.

Royal King was by King P-234 and out of Rocket (later registered as Rocket Laning). Rocket traced to Yellow Jacket on both sides of her pedigree.

Albin and Whiteside took 2-year-old Royal King to a show in San Angelo on April 8, 1945, where he was approved for AQHA registry by Helen Michaelis. Someone at the show offered $1,500 for the King colt. Whiteside believed you could never go broke making money, and cajoled Albin to accept the offer. Instead, Albin wrote him a check for $750 and kept Royal King.

Royal King learned to cut in a herd of goats, training under Bob Burton and later James Boucher. He had enough 'cow' in him to excel in the sport with anyone in the saddle, and he was ridden by numerous cutters throughout his career. "Royal King was a horse that you could put anybody on and win," said Albin's wife Charlie Mae, in 1986. The stallion placed among the National Cutting Horse Association’s top-10 annual earners four times in his career, and earned $24,003.

Even while he was competing, Royal King was continuing his sire's legacy as a great sire. In his first crop, 12 of 13 foals earned AQHA performance Registers of Merit. Ten of Royal King's foals competed at the first Quarter Horse show at the Texas State Fair in 1947.

His influence on cutting was most apparent in his cow-smart daughters, which included NCHA Hall of Fame member and earner of more than $35,000 Miss Nancy Bailey, and Royal Smart, who produced multiple AQHA cutting world champions Royal Santana and Smart Peppy. Smart Peppy was dam of NCHA triple-crown winner Smart Little Lena.

Royal King always stood at bargain basement prices and Albin never turned a mare away. Nonetheless, the stallion was the leading sire of performance point-earners in 1959 and 1963-67. All in all, Royal King sired a total of 590 registered foals.

Royal King died in 1971. He was inducted into the American Quarter Horse Hall of Fame in 1997.